Er. Laxman Pokhrael was born in Pokhara Metropolitan City -14, Chhinedada, Kaski.  He received his basic level education from Sukraraj Bal Bhadra School and passed SLC from Amar Singh High School in 2045 BS. He completed his I.Sc. from Amrit Science Campus, Kathmandu. Subsequently, he joined Pulchowk Campus and studied Civil Engineering in bachelor level. After the completion of his bachelor’s in engineering, he attained his master’s degree in Environmental Engineering from Pulchowk Campus. Later, he also attained an MBA from Shovit University, India. He always had that urge to do something greater and grow academically.

Mr. Pokharel had a vision to help students wishing to get into engineering programs. There weren’t any preparation classes for the engineering aspiring students at that time and only few brainy and hardworking students acquired scholarship privileges and passed the entrance examination. He himself had come across difficult times when he had to face the entrance examination for BE. He was freshly graduated and had known few about the profession. However, with his never-ending passion for the subject matter, he got enrollment privilege at a college, and all his struggles were worth it. He graduated from Pulchowk Campus in 2054 BS, and during his study, he made his commitment to help freshly graduated hopefuls get entry into engineering colleges.

During his third semester of B.E., he felt the necessity to start coaching classes for the students of the college. He was a multitalented person and was involved in many associations. Apart from daily monotonous study, he was also a part of Nepal Engineering Students’ Society (NESS) of Pulchowk Campus. The society would conduct preparation classes for two months. Later, he established PEA in 2051 BS. This was his first life-changing decision which created a milestone to his visionary future. The PEA published an advert in Gorkhapatra, a national daily newspaper, for engineering preparation classes. On the very first day, approximately 80 students turned up for admission at PEA. This was more than what he had ever expected. But at the same time, he knew that many students were in need of guidance for engineering, too. That year alone, there were 300 students who got enrolled for the same purpose there. Since then, PEA has been in the number one list for almost every student who decides to pursue engineering qualification as a gateway to an appealing career. About 1,30,000 students enrolled at PEA for the engineering entrance preparation whereas 42,000 students became engineers. With 25 years’ ever-growing acclaim, he has established PEA as the standalone institution to run effective preparation classes for engineering programs. It is celebrating silver jubilee this year.

As many as 52000 engineers have been produced in Nepal. Out of them, he has personal touch with more than forty thousand engineers. Thirty thousand students are pursuing engineering education at different colleges of Nepal and abroad. Er. Pokharel has been elected unanimously the President of AECoN from  7th Convention. In addition, he has been successful in conducting an Engineering Education Fair with Career Talk Show Program which was really constructive and fruitful for those aspirants who wanted to study engineering courses in Nepal. It was the first ever held fair that disseminated consummate information and program prospects to the prospective engineering students in Nepal with the initiation of Mr. Pokharel. Excerpts:

How did you enter into the arena of engineering education? What inspired you to be an engineer?

I was highly influenced by the growing charm of engineering jobs from the very beginning. One of my brothers, my father’s elder brother’s son, was an engineer at Department of Water Supply and Sanitary (DWSS). He used to come to our house in a government vehicle which ignited my enthusiasm to embark on engineering education. When I came to Kathmandu, most appealingly designed houses were of engineers, which also attracted me to be an engineer. I was considered to be a brilliant student in school level and always used to stand first position. It was also a motivating factor for me to become an engineer. I joined Amrit Science Campus for I.Sc.(biology) and then shifted to physics after some months. In those days, there were offers of scholarship from Russia for the toppers. There was also a Colombo Plan of India to provide scholarship privileges in the engineering programs for selective students. The Education Ministry of Nepal used to select the students for scholarship in Colombo Plan. My two brothers had also returned to Nepal after completing engineering with scholarship with the help of the Colombo Plan which fired my enthusiasm further to become an engineer.

What difference did you find before and after joining Pulchowk Engineering Campus as collegiate for the engineering program? Was that up to your expectations? How difficult has it been for you to become an engineer?

To be an engineer has nothing to do with arduous efforts for those students who have strong desire and passion for attaining a success. I was also passionate about being an engineer as my brothers’ successes inspired greatly. So, I didn’t feel any difficulties while attaining an engineering qualification. I established PEA while I was studying in Pulchowk Campus. So, I couldn’t attend campus regularly, but due to my strong faith and untiring efforts, I completed my engineering course successfully with good marks.

What are the essential qualities that ensure successes in engineering programs?

How did you get inspired to establish PEA?

I started teaching mathematics and science after completing my I.Sc. and continued B.Sc. in Amrit Science Campus. I had studied B.Sc. second year before embarking on the engineering program. I used to teach mathematics and science in a tuition center and even as home tuition. When I joined Pulchowk Campus, I was elected member of Nepal Engineering Students’ Society, which is a student welfare organization, with highest number of votes. The Nepal Engineering Students’ Society (NESS) started entrance preparation classes from 2050 BS in the college premises of Pulchowk Campus. The tenure of committee completed within a year, and a new committee was formed. After completing our term, we couldn’t run entrance preparation classes. So, we (Roshan Shrestha and I) decided to establish an institution for entrance preparation for engineering education. We collected students from Tri-chandra College, Amrit Science Campus, Pulchowk Campus and so on and started PEA with 80 students on the first day. It encouraged us to run such an institution in a full-fledged way.

Since you entered into the arena of engineering in 2050 BS, what differences have you experienced in this field in various intervals of time?

How do you acknowledge the contributions of private colleges to engineering programs in Nepal?

Private sector has invaluable contributions to the entire education system in Nepal. While talking about engineering education, private sector occupies more than 65 percent of the total number of students pursuing engineering education in Nepal. In addition, private engineering colleges in Nepal are imparting globally acclaimed quality education. They have made invaluable contributions to the national economic policy as a large number of students decide to pursue their engineering course in their native land rather than looking for the same opportunity in a foreign land.

The data show that the trend of ten-plus-two graduates going to India for engineering education is increasing in the course of time. On the other hand, the Association of Engineering Colleges-Nepal (AECoN) has recently organized an education fair with the aim to stop those career hopefuls from going to foreign lands for the same programs. Could you share with us your experience regarding this matter?

AECoN is the umbrella organization of all the private engineering colleges in Nepal. The organization has recently organized a fair with an aim to disseminate genuine information about bachelor programs in Nepal. At the fair, a series of talks was organized where renowned entrepreneurs and experts discussed, solved queries of participants and portrayed a clear picture of benefits of attaining a bachelor degree in Nepal. Moreover, more than a dozen Nepalese institutions participated in the event. As many as 600 curious students had a substantial gain from the fair. In addition, the fair also conveyed a very important message that Nepalese engineering colleges are competitive and advanced enough to impart globally acclaimed education at a low fee structure.

In your opinion, why engineering education should be studied in Nepal?

As you are the president of the Association of Engineering Colleges-Nepal, what things should be improved by private engineering colleges in Nepal and what challenges are they currently facing?

All the universities have prepared the specific criteria to run an engineering college and there are three layers for the monitoring of engineering programs, such as Ministry for Education, Engineering Council and the respective Universities. So, the private colleges have maintained standard by fulfilling the given criteria. In this regard, I would like to suggest if any colleges have not maintained the set criteria, it’s a responsibility of the government to oblige them to fulfill the criteria. But on the other side of the same coin, most engineering colleges in Nepal are facing insurmountable problems because of unnecessary political interferences and activities. Due to such activities, the academic environment is under the threat which will surely emasculate the quality of education.

What suggestions would you like to give ten-plus-two graduates who are in pursuit of award-winning bachelor level programs across the globe? 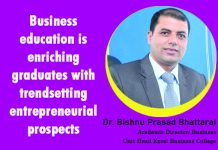 How to figure out right engineering college 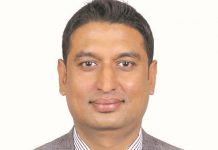 No one remains unemployed as long as they own management qualifications 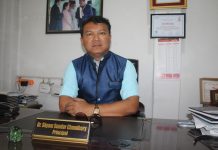 Our collaborative approach to management teaching is exceptional

Established in 2065 BS, COLLEGE READERS is a national level educational magazine that caters secondary and college level education. It focuses on providing up-to-date information to the general as well as academic requirements for the college level students of Nepal about various education options worldwide. It also gives information about other support services and service providers which play a vital role in weaving the career path of students in today’s world.
Contact us: collegereaders123@gmail.com

Education Pedagogy of the Modern Time and Our Position

Leadership: A Reflection on Core Values, Approaches and Importance